I get all my best ideas in the shower.

I don’t want to backtrack to how we got here. Because we know how we got here and I’ll be honest. my patience is pretty limited right now.  But since Tuesday there’s been a marked rise in hate crimes across a broad spectrum of targets, much the same as there was after the Brexit vote.

At some point after the Brexit vote, a woman named Allison had an idea to wear a safety pin (since they were ubiquitous and inexpensive) to be a visual symbol of literal safety for people likely to be targeted by hate crimes. Though the idea went viral, it was not without fair criticism.  It’s also imperfect, because safety pins are… ubiquitous and inexpensive.  But it got people talking some,. and far more importantly, listening some.

Since Tuesday the idea has crossed over the Atlantic to the US and has gone viral here too for reasons that no one needs explained to them unless they’ve been living in a biodome or something without contact from the outside world (in which case you wouldn’t be reading this.)  Which brings me to my being in the shower.

It occurred to me, as I was standing there trying and once again failing to get the feeling of being trapped in a house with a pathological narcissist off my skin, that one of the problems with the safety pin thing is that it’s a meaningless gesture unless there’s some other thing behind it.  Some other help besides pinning a pin to your jacket, especially if you’re the kind of person who tries to avoid conflict when it happens (Don’t look at me, I’ve never been that person, but a lot of people are.)  It then occurred to me… wait a minute.  No one raises charity money the way I do, what am I STANDING HERE UNDER THIS WATER FOR?  I quickly finished up and went straight to my sketchbook.

See, I have an unlimited source of quail eggs.  I use them to make skull egglaces.

I began drawing very quickly.  What if I used them to create necklaces that incorporated the pins, customized of course because that’s how I roll,. and then donated a chunk of the proceeds to charities designed to help the people who have been targeted?  People get jewelry with the pins on, charities make money, and people talk some and listen some.

Here’s the quick sketch I drew, though this is just an idea, there’s infinite ways to do this: 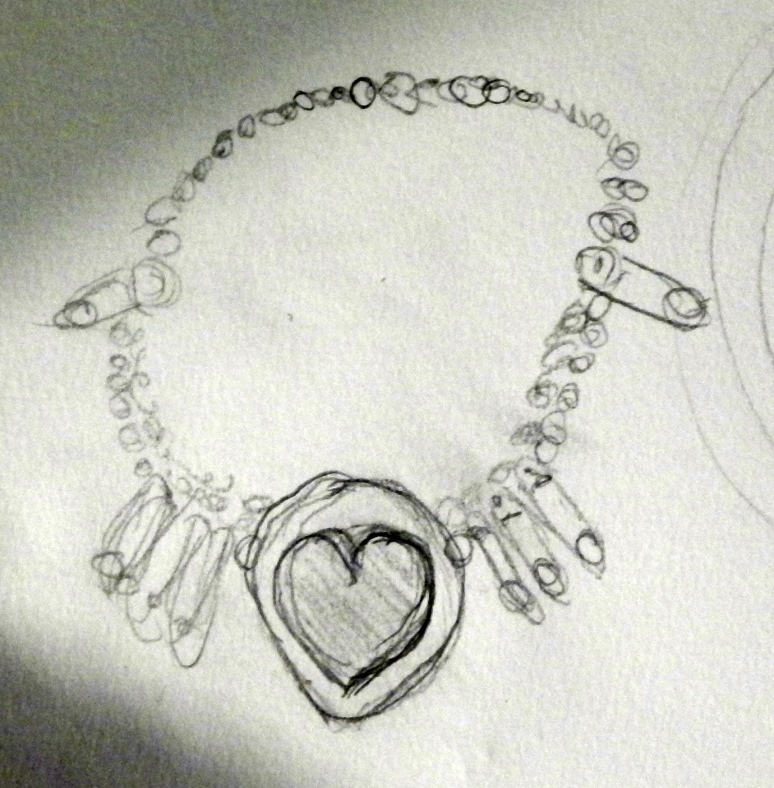 It doesn’t have to be a heart carved in, it could be basically anything.  It doesn’t have to be that pin number or placement.  It could even have the pin dangling from or attached to the egg itself.it can be any color or bead combinations.  Any and all variations are possible on this.  And so too are the list of charities, from things to help immigrants, to charities to help GLBT kids, trans* charities,  NARAL and Planned Parenthood, and so on.

Normally, I sell skull egglaces this size for $50+  $10 shipping (extras like, special beads or whatever are a little extra. )  Just so we’re ALL giving, I’ll leave the price the same, and send  20% of the proceeds to charity.  I have a HUGE list graciously provided to me by my friends, but if you have one in particular that YOU like, just tell me which one it is. Long as they take online donations, we’re good.  You can use the skull egglace order form (just choose a quail egg and explain that it’s a safety pin egg in the comments — I’ll get back to you and we’ll customize your design.  When we’re ready, I’ll throw an order up to the etsy store so you get the benefits of their buyer protection program, and I will cheerfully show you proof of the donation to your charity of choice.

Only one thing, though. Only do this if you’re going to not only wear it, but actually speak up on behalf of people who need your help AND if you’re going to listen to them too, so they can tell you how best you can help them.  This thing only gets you some jewelry and a small charity donation. It’s not magic, and it’s not a panacea.  You have to do the rest, and it’s a hard and important job. K?  We good on that?

Im a little snowed under right now working on 2 commissions and getting ready for the world’s tiniest craft show in December, but I promise to make these as much of a priority as I can. As always, lead time for egglaces is *about* a week, depending on complexity.