Sometimes, you really do have it right the first time.

The egg itself is done now.  I’m going to be working on the stand for a few days, though.  But before I put the egg aside for the moment, I want to talk once again (it’s a running theme.) of how important it is for designers and artists to be able to look at something and say “nope. ” and toss it if it isn’t right.

After I beaded the mask and trim on the egg, the only thing left was the nose.  I had wanted to bead that too, as a kind of nose piece attached to the mask.  At first, I did the beadwrk in the same gold beads as the mask, but it just didn’t look right- there was not enough differentiation between the mask portion and the nose.  So I tried a second time, and used a darker, more bronze colored set of beads. The beading on the nose was tricky due to the shape and took about 8 hours to do.  And so help me, I finished it, took a single photo and ripped every last bead off, because I hated it.  In the end, I left the nose without beads, and used a gold/black paint wash to create some shading and a gold/pearl wash to create a highlight and left it at that.  Part of the issue is the egg design itself is not perfectly symmetrical. the nose is slightly off too, in a way that’s “natural” in the sense that no one’s face is completely symmetrical, but a pain in the ass when you’re working on artwork. It’s also not asymmetrical in a way that I can easily fix, as this portion of the egg is unsupported by a larger framework.  I cant mess with it too much or Im going to shatter the whole thing.  So I’m just going to have to live with it.

I also decided to coat the “blank” parts in a dead matte varnish.  I considered a gloss, but the beads are already so sparkly and shiny I thought it needed some contrast.

Anyway, here’s the one shot I took with the bronze beads vs. where we are now.  These are process shots so they’re just quick and dirty, but you get the idea. 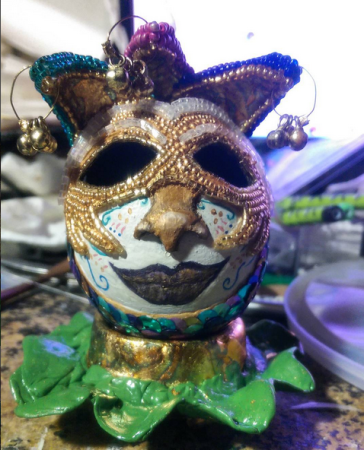 The beads on the nose were a) a distracting, thogh similar color, b) made the nose look disproportionally large, and c) accentuated the fact that it’s wildly asymmetrical.

I still have a lot of work to do on the stand.  fortunately, it doesn’t matter how rough the ruffle sculpts are. First of all most of their volume won’t be seen (there will be three stacked on top of one another so you’ll lose most of the volume visually toward the interior, so IDGAF how rough they are) and b) because they’re  meant to mimic crinkled fabric anyway.  and c) they’ll be covered in so much stuff it just doesn’t matter. The larger problem is the fact that though they do have a wire on the interior circumference (against the  stand) they don’t have one at the outer edge, so I have to babysit it until it will hold its shape without collapsing in on itself.  That takes about 90 minutes per ruffle, and I have to do them separately so they don’t stick together. It’s a time sink, but not really difficult.

However the stand itself will likely take the bulk of the week.  Fortunately, it’s t a stage where I can move on to other projects, so if you were waiting to place an order or buy something from the shop, now is a good time.

Also, if you don’t follow me on any of my twitter accounts, you probably don’t know that on Friday I announced a new way to get free eggs. (that wasn’t a typo.) Head over here to read what that’s about.

Finally, I was asked a couple days ago if i take payments.  yes, of course I do, don’t be silly. I totally understand the desire to buy a thing that you can’t shell out for all at once. Just contact me at eggrotechNYC@gmail.com and I’ll sort out whatever we need to do.

Though normally I’d try to update again on Wednesday (Im really trying to update three times a week now) I have surgery Wednesday (oral, no one panic.) and I really doubt I’ll be able to do that until I’ve rested, as Im being put under general anesthesia to have it done. (before anyone asks, two wisdom teeth and a secondary molar.) So I’ll see  everyone after I get back from that. However, I can start any orders placed before then right away. No problem.