So I had tried to film an update but… that didn’t go so well.  So you get a post instead.

First off, I want to thank everyone who has boosted the signal so far on this. I got support from people I didn’t expect to get it from, and honestly, I’m so grateful for everyone who has retweeted it, posted it on Facebook, G+, Instagram, on their own blogs, on forums and email lists… Really, thank you.

I did have a moment I truly didn’t expect when the egg got retweeted by Andy Bell.  And if you don’t know who he is, stop right now, and go look it up.  I won’t lie, I ran around in my living room in a circle.  Because seriously. Andy Bell. 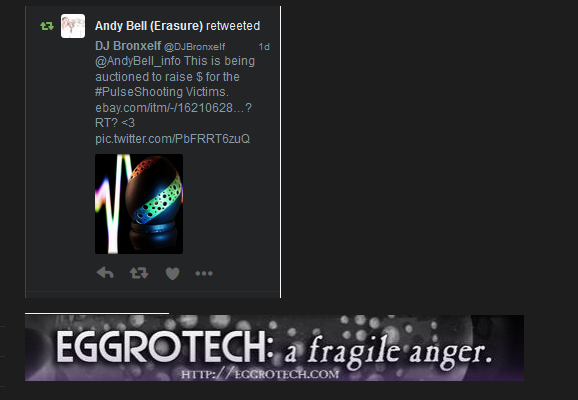 As of right now, the egg has five bids on it and currently is sitting at $172.50USD, and has 4 watchers.  Almost 1000 people have seen it.  But the auction is long (I made it long to give it the most possible chance) and that means more PR, which I am admittedly terrible at(truly. Awful.).  So please, keep letting people know about it.  I’d love to see it hit $250.

I should have another egg(a regular one) up by morning – it’s done, I just have to shoot the photos, etc.