Do you know what it means….

(either you know the other half of that lyric or you don’t. If you don’t, go look it up.)

The good news is that the photo I took of the Sakura egg (the main photo) made Flickr explore.  That was great- 3500 people saw it in 24 hours.  Thanks to everyone who stopped by.  It’s still available (the not so good news, but on the upside every time I pass it on my way to my desk I am more satisfied with it. It really is nice, gotta be honest.)

The week kind of got away with me with other stuff (and this week is traditionally problematic anyway) but I began work today on the next egg.  I still have a rather long egg shape to work with (my next one should be good to go on another attempt at a skull.) But as happens I have a commission for a(nother- Ive done one before) Mardi Gras themed egg.  This one will be more elaborate than the last one, with beads and sculptural elements (Im totally still willing to do plain eggs with neither, but these are really a lot of fun and I like using some other skills and media.)

So far, I’ve sketched out the design basics and added the roughs of the green stuff(though these are just meant to be beads so there won’t be much cleanup) and Ive started working on a base (also beads) separately.  I’ll attach the base once it’s done- it’s too sticky to add in advance without the green stuff deforming under the weight of the egg.  I used a sharpie to indicate either beaded or green stuff areas and pencil for carved areas.  It will take a couple days to fully get the base together- the green stuff is too sticky to do more than four or five beads without letting them cure and attach.

I am not sure if I need new beads or not- I have beads in green, gold and purple aplenty, but I am not sure they’re the right size for what I need.  I might need greens and purples in a 15/0 (I have gold in that size.) So here’s the beginnings of the new thing: 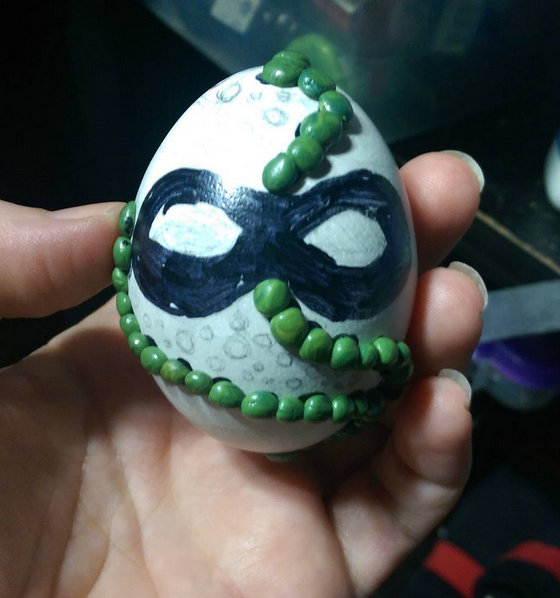 Right now, the green stuff is curing. I’ll work on it more tonight.