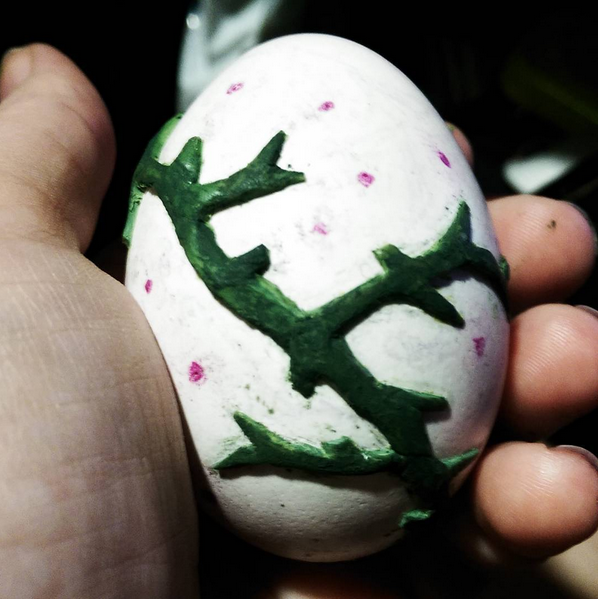 So for the past couple days I’ve continued working on the egg I was discussing last time.    I went over the egg with an xacto knife, trimming away any green stuff that looked out of place, and creating a more tight and finished looking design for my branches.  I used liquid green stuff to fill any gaps.   Mostly I just made it tidy. Once that was finished, I sketched out in a general sort of fashion, where I wanted the negative space, that is the space I was going to carve out, to exist.  I had to both leave room for the flowers and to avoid certain carving choices that were likely to cause shattering. I know it looks like a hot mess at that point but really, it will be ok.    At that point though, the dangerous parts of doing this sort of thing begin. They’re the parts where you’re likely to lose the egg to shattering.  I’ve lost hundreds of eggs over the years. Sure, I lose far fewer than I did when I started, but don’t let anyone tell you that eventually, they all work out. They don’t.

Usually, when eggs go under, it’s one of four causes.

1.  A design flaw.  Many designs look good on paper, and don’t work out in practice.  Anything with long figures, or a lot of undercuts (like fancy swirls and such) that are made out of one contiguous piece, often just don’t work.  Basically, if your design involves creating a sort of peninsula with the egg, where it’s only attached on one side? It’s going to be very hard to carve it to completion.  As you’re carving, the vibration just takes that piece out at the attachment point.  Also, anything where you’re going through a significant circumference of the egg (like the mouths on the skull eggs. )  The vibration stresses the piece that’s still attached, and you can’t easily clasp the egg to stop it.  So far I’ve lost four skull eggs this way.  Fortunately, adding the green stuff sculpted parts significantly helps with vibration stability, so you can do some more daring stuff you wouldn’t be able to get away with without it.  When you have a design flaw like that, learn from it and redesign it.  It’s easier than attempting the impossible,  and a lot less frustrating.

2. An egg flaw.  Sometimes, the egg is just flawed in ways you can’t see.  Hairline cracks that won’t appear to the naked eye will take out a design when put under carving stress.  It happens.  It’s not something you can easily check for, either, though you can hold up your egg to the light to try and see anything obvious.  Other than that it’s just a thing you accept.

3. Artist error.  This is a polite way of saying “you got distracted.”  Usually, I blame the cats, as it’s usually their fault. But, anything will do it- the doorbell or my phone ringing suddenly, a door slamming… any sudden sound that distracts me from the moving, live carving bit in my hand that’s attached to my egg.

4. Overdyeing.  The mechanism by which egg dyeing works involves acid (in this case, vinegar, like you use for easter eggs) eating away at the eggshell and making it more porous and able to accept the dye in its liquid medium (in this case, water.)  However, that does not come without a cost.  Dyeing an eggshell weakens its structure.  The longer an egg sits in the dye bath, the weaker that shell becomes.  No one cares on an easter egg because youre going to peel it and make egg salad anyway, but in this case the dye is not there to color the exterior of the eggshell. That’s just a side effect.  The dye is used to color the interior of the shell, and the darker you want that color to be, the more time it has to spend in the dye bath.    This is why black interiors are so difficult to do.  The resulting egg is so fragile that it’s very hard to paint.  Overdyed eggs don’t really shatter, either. They just sort of *poof* into a pile of dust, like something out of a cartoon.  This, by the way, is why I charge extra for black interiors.  The amount of work is increased, as it the likelihood that I’ll have to run the egg multiple times before I get one that will stay together.

But I’m getting ahead of myself.  First, I had to carve this egg up.  Because of the green stuff sculptural support, I was able to carve huge, huge holes that believe me, would have almost certainly 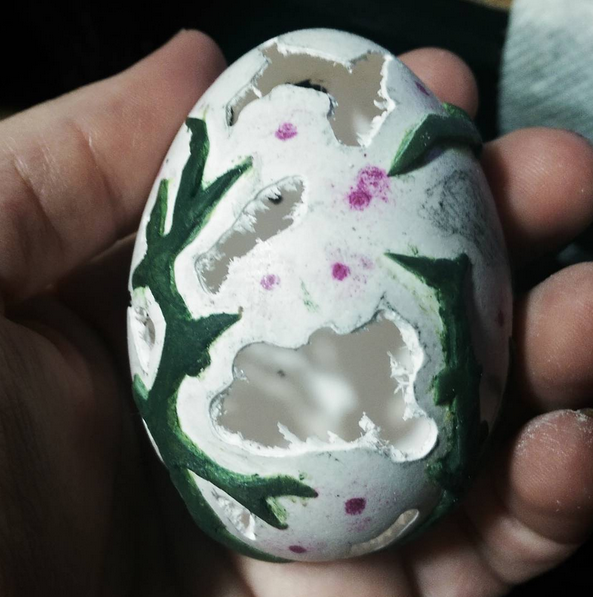 shattered the egg otherwise.  I was able to remove an enormous amount of material from the egg.  If you want to see a video showing all sides of it once it was carved, check here (I have no idea how to make that embed here.) But it took me a couple days to get all the carving taken care of. I was careful to stop the moment I felt too tired to be able to focus completely on what I had in my hand.   I used abstract shapes, sort of like the areas you see between the branches of trees.  But because of the presence of the green stuff, I was able to carve way, way bigger holes than I could otherwise, so I took advantage of it.

Once the holes were carved up, I had to put the egg in bleach.  I was asked this morning why I do this. It’s because on the interior of an eggshell is a membrane. You can see it in the photo- it’s why the holes look sort of ragged and fuzzy.  It’s also why sometimes you have trouble peeling your hard boiled eggs.  You can see how this works in this infographic here. I want to remove that, so the holes are clean and there’s nothing but eggshell remaining.  The membrane is made of protein, and so bleach will dissolve it.  Basic chemistry 101, how acids and bases work sort of thing.  I keep a plastic tub of bleach (it’s a pint container from some egg drop soup.) and I top it off every time I add another egg. Every so often it will get supersaturated and I’ll have to filter it (very boring process involving a funnel and a coffee filter) and start over.  But generally, adding a fresh shot to the container works fine.  Because it’s dead time otherwise, I tend to just leave it in the bleach while I sleep. 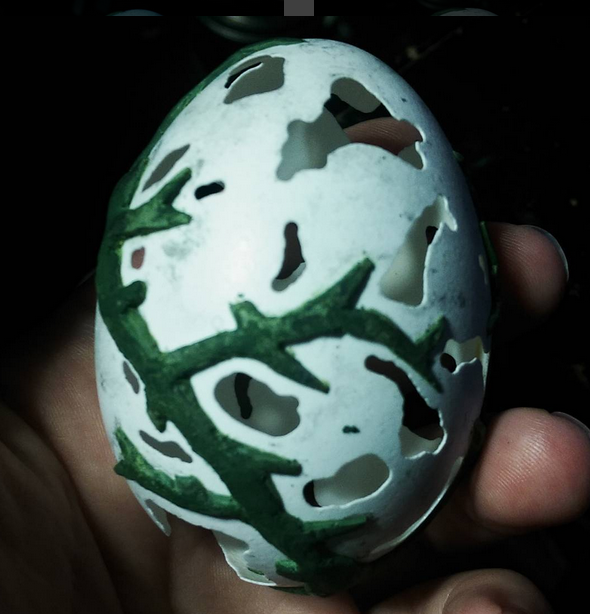 After I got up today I filled the sink with water and used a plastic spoon to fish the egg out of the bleach.  I put it in the water and swished it around a little to clean it off.  I didn’t bother to care about the leftover pencil marks and such. I could remove them completely but I’ll be painting over them anyway, so it doesn’t much matter.  So far, the egg has held up.  Hallelujah.  I set it to dry and once it did I looked it over for obvious flaws or damage. So far, so good.  Now comes the scary part- the dye.  If it makes it through that, it’s unlikely to break before it’s done.  This is the worst part.  Fortunately this 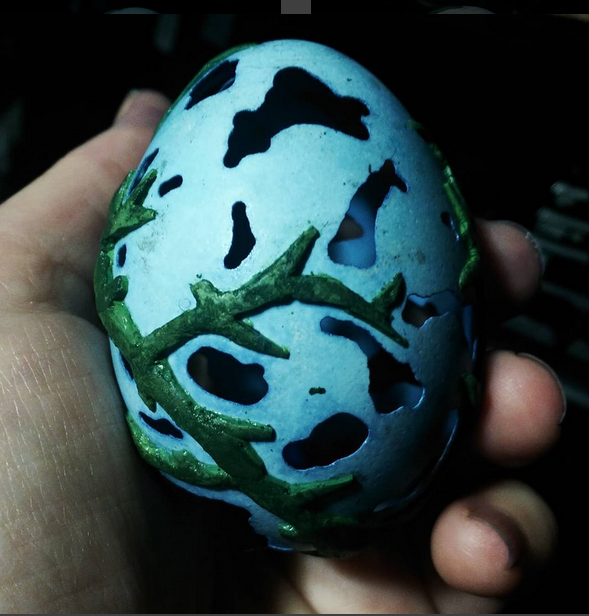 design doesn’t call for a dark interior color.  I decided on a pale blue.   Dye needs to be heated and activated, so I tossed the dye pot in the microwave after I added some extra vinegar (I keep several base colors ready mixed all the time)  and once the dye was hot (I kept it in the microwave for about 90 seconds) I slowly lowered my egg into it, checking on it every few minutes, rotating it to get even coverage, and making sure it stayed together.  The photo is a fair bit darker than it is in person. The egg is definitely a pastel, sky blue.  I removed it from the dye bath the moment the egg’s interior seemed dark enough and carefully dried it on a paper towel, blotting the egg and rolling it gently to remove as much dye as possible from the exterior so the acid eating into the egg would be more limited, and set it to dry.  The next steps are sealing, painting and beading, but those have to wait until I am certain the egg is completely dry, so it’s just sitting around doing nothing while I write this post.  But in the meantime, last night, I worked on my twig piece.

I used the stuff I bought at the bead store, some glue and a paintbrush, and a toothpick to create a little cherry blossom branch.  It came out perfectly. The only thing left to do on it is to paint the green stuff that’s adhering each blossom to the twig. The first thing I did was put several coats of dead matte varnish on the twig.  This way it’s preserved, even though you can’t see it.  What you can’t easily see in this image is that the petals are iridescent and go from a deep pink to white, with a flash green thrown in. You can see the flash on two of the blossoms in the photo.  But the beads are to different colors/sizes to give some variety of color and shape, and the petals are some flower shaped sequins with a hole in the center. This was ideal, because it let me put a bead of green stuff behind it, press it in, and adhere it firmly to the twig.  All I had to do is let it dry overnight (which I have) and I’ll just paint those areas when I paint the branches on the egg itself.

So that’s where things stand on this one as of now. I expect it to be finished by Monday and ready to roll.  If you want to call dibs on it, let me know!

Tags: carved, design, egg, holes, how I did that, process, update